Best Controllers for SteamLink in 2021

Have you ever wanted to play Steam video games on your living room TV?

With SteamLink, you can! Steamlink extends your gaming experience to your TV, cellphone, or tablet. You can download the native apps from their website for free.

Now, you could just use any old Bluetooth controller with SteamLink. However, to get the best possible experience – you’re going to want a proper controller. (Trust me, I’ve spent the last few weeks testing out each controller in the list below.)

Without further ado, if you’re looking for the best steam link controller in 2020, look no further than this ultimate Steamlink controller review guide. Keep in mind, this guide is for Steamlink ONLY – not for playing Steam games on a Windows 10 PC.

In A Hurry? Here’s our Top 3 SteamLink Controllers… 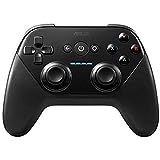 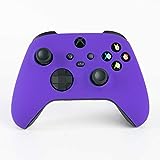 SteamLink is both a hardware device(box) and a software application.

Steamlink was originally released back in 2015 as a hardware device. It was instantly a hit among the gaming community. It opened a new world for gamers; transforming the way they played games. No longer were they confined to playing games at their computer. Just connect the SteamLink to your living room TV, pair it to your Steam account, and away you go!

As an IT Manager who works at a desk all day – this was a gamechanger for me.

In November 2018, Valve discontinued production of the Steamlink device. And as of December 2019, Valve is no longer it’s Steam Controller either. As of writing this article in June 2020, SteamLink is only available as a software app.

And for the controller?

Valve did a mass $5 flash sale to get rid of the remaining Steam Controller inventory and is sold out worldwide. You might get lucky and find one from certain sellers on Amazon, but for the purposes of this guide, I’m not going to recommend the Steamlink controller as one of the “top” controllers because it’s basically unavailable worldwide.

P.S. If you haven’t already installed SteamLink, I recommend following this tutorial. All you need is a Raspberry Pi 3 kit, an SD card, and about 20 minutes of your time.

The Playstation 4 controller is the best overall controller to use with the SteamLink. Sony has spent 30+ years perfecting the look and feel of the controller. I may be a bit biased (I am a PS4 user), but I personally think the PS4 controller feels the most natural when playing computer games.

The PS4 controller is Bluetooth enabled and doesn’t require any extra dongles.

If you have a PS4 already, I recommend splurging and getting a dedicated controller for the SteamLink. Otherwise, if you move it back and forth between ps4 and computer you’ll need to re-associate the device each time by plugin in the USB cable into the PS4.

The Ps4 controllers only remembers the last paired device.

The Xbox One S is another one of the highest rated Steamlink/SteamPI controllers. It works very over a Bluetooth connection. In terms of performance and functionality,  it seemed to perform slightly better than the PS4 controller in our test.

Many people report that there is virtually no lag with the Microsoft Xbox One S controller. It feels just like they are playing directly on their PC.

To pair it to Steamlink, you’ll first need to update the firmware if you haven’t already. You can either do this plugging it into your Xbox One or a PC. If you don’t have an Xbox one, you can take it to a friends house and update it from theirs. It takes less than 5 minutes.

What’s the difference between a standard Xbox One controller vs an Xbox One s?

The biggest difference is the size and feel of the controller. It features a rubber silicone texture the placement of the bumpers, the D-pad is easier to press, and has newer bluetooth connection which results in better Steamlink performance.

However, it is a bit pricier than than standard Xbox One controller.

This ASUS gamepad controller works perfectly with Steam games. It may not be the prettiest or most comfortable option, but if you’re looking for a rock solid SteamLink controller –  this is one of the top 3.

In terms of look, feel, and price, the ASUS TV500BG is like a perfect combination between a PS4 and Xbox controller.

You will need to remap the buttons after initially pairing the device, but that’s a pretty standard for most controllers.

Some users report that the controller is smaller than expected and that the buttons are a little sensitive. Sensitivity can always be adjusted in most games so I don’t see this as too much of a downside, moreso as an FYI. Overall, if you are looking for a great controller and decide not to go the PS4 or Xbox route, you can’t go wrong with this one. 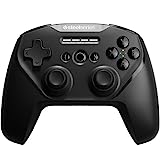 The Steelseries Status Duo works with the Steam Link via a bluetooth connection. It’s considered a high-end controller that works well with Windows 10 as well as Android. It’s another very highly-rated controller and is a fan favorite.

It’s a perfect mix between both the PS4 and Xbox controllers.

If you’re running SteamPi, chances are that you are trying to figure out which controller is going to be the best one for you to use. After all, just about every review or forum for “Steamlink compatible controllers” are talking about the physical box that is now discontinued.

If you’re finding yourself running into the same issue, I have a solution for you: Use an old computer. Format it with Windows 10 (don’t worry – you won’t need a product key for this). Remember: SteamLink uses the processing power and resources of your gaming computer, not this secondary computer. So really just about any old computer will work really well for this.

Don’t have an old computer?

Ask your company’s IT department, I’m sure they’d be glad to get get rid of an old one. Source: I work in IT and old computers always take up way too much space.

Alternative Options: Use cheap Windows 10 computer running Steam instead of SteamLink. Then you can use ANY wireless controller. The full list of supported SteamLink controllers can be found here: https://steamcommunity.com/app/353380/discussions/0/1473096694452098426/

If you don’t feel like shelling out twice as much money for the Xbox One S controller (which has built-in bluetooth), another great option is the Xbox 360 controller. This one works with the Steamlink is a very practical option when it comes to striking the perfect balance between comfort and usage

Keep in mind that the Xbox 360 controller is wired, so if you plan on using it with Steamlink instead of gaming on your Windows 10 computer, you will need a wireless dongle. The biggest advantage with the 360 controller is that the buttons are mapped correctly so you get started gaming right after pairing.

Just make you have a proper line of sight to the dongle to ensure the strongest connection.

You will need the Microsoft Xbox 360 Wireless Receiver for Windows if you choose to go this route, as well as the Virtual Here software with a wired connection.

Long story short – the Xbox 360 wired is a solid contender for one of our top Steamlink gaming controllers.

We hope this guide simplifies things for you when looking for the best Steamlink controller that is compatible with you raspberry pi, Android, Apple, or other bluetooth device.

You will always get the best performance when hardwiring your computer and your SteamLink device. I recommend making sure you have a solid connection using SteamLink before spending too much time worrying about the perfect gaming controller or gamepad.

Also, if you’re wanting to wirelessly connect your ds4 controller to your PC for remote play, you should check out my step by article.

We hope this ultimate guide helps save you some time when it comes to making a buying decision!

How To Reset Wyze Cam

How To Copy Files to Google Drive using...

How To Install Kimai Time Tracking App in...

How To Setup Plex-Automatic-Pre-roll-Gui in Windows

How to install Snippet Box in Docker

How to Install Flame Dashboard in Docker

How To Automatically Start Sonarr & Radarr After...

How To Install ErsatzTV to create IPTV Channels...

How To Install DizqueTV to create IPTV Channels...